Unraveling a muddy catch from the Atlantic

An exciting moment for Earth scientists Dr Martin Ziegler and Ilja Kocken: their first glimpse of the sediment cores they collected in the middle of the Atlantic Ocean on board of the Research Vessel Pelagia. In October they were at the NIOZ on Texel to study their drilling material from the eighth leg of the Netherlands Initiative Changing Oceans (NICO) expedition. Martin Ziegler reports.

Almost half a year after our expedition across the Atlantic Ocean we are at the NIOZ to open two of the sediment cores that we collected in the deep-sea between the Bahamas and Ireland. We took long sediment cores from the water column and the sea floor to reconstruct past changes in the North Atlantic climate and oceanography.

These findings will enable us to put modern climatic changes into a wider context. On board of the RV Pelagia there was not enough time to split the cores so we are very excited to finally get a first look at our ‘catch’.

13 meters of past climate
The two sediment cores are both around 13 meters long, so we first have to cut them into sections of 1 meter. Our first look at the inside of the cores already reveals a lot of variation in the colour and composition of the sediments. This variability is directly linked to past climate change  and ocean circulation of the North Atlantic. Soon we also find some small pebbles in the sediments. These so-called ‘dropstones’ demonstrate that icebergs were melting at our core location in the past. When icebergs melt they release sediments from the ice into the deep-sea. 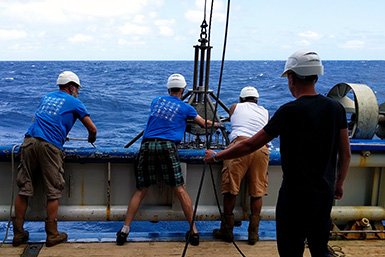 Drilling on board of the Pelagia. Photo: Ilja Kocken 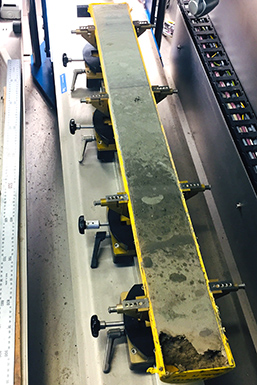 A sediment core - taken during the NICO-expedition leg 8 - in the lab, ready for investigation. Foto: Martin Ziegler.