Hans Slabbekoorn, researcher at the Institute of Biology Leiden, is from the 16th to the 26th of July on board of the Pelagia, the Dutch national sea research vessel, which is currently on a collaborative mission for the National Initiative Changing Oceans (NICO). Slabbekoorn will study the effects of noise pollution on underwater soundscapes and marine life.

Scared by cavitation
Hans Slabbekoorn is involved in three acoustic studies. For a study in leg 11 (from Texel to Horta, Azores), he collaborates with Jos Koning from the Maritime Research Institute Netherlands (MARIN, Trials and Monitoring) and Christ de Jong from the Netherlands Organisation for Applied Scientific Research (TNO, Acoustics and Sonar). Through on-board and in-water recordings, they study the sounds generated by the engine, but especially by cavitation (the transition of liquid water to vapour in low pressure areas).

Rotating propeller blades cause periodic fluctuations of the pressure field in the water and cavitation bubbles will collapse fiercely when entering an area of higher pressure and generate high-pressure shockwaves: vibration and noise radiating into the boat and into the water. The cavitation sound is modulated in amplitude and frequency and expected to be especially disturbing to aquatic animals. The recordings will be analysed to study engine efficiency and potential for propeller erosion, as well as the scaring properties from the animals’ perspective.

Deep sea soundscapes
In leg 12a (from Horta to Terceira, Azores), Hans Slabbekoorn collaborates with Sabine Gollner from the Royal Netherlands Institute for Sea Research (NIOZ, Ocean Systems) and Sander von Benda-Beckmann (TNO). They will study soundscapes around deep-sea hydrothermal vents by deploying sound loggers near the so-called rainbow vents at the Mid-Atlantic Ridge (> 2km depth). The specialised animal communities at such hot vents may rely on spatial variation in sound spectra for dispersal and establishment of pelagic larvae. 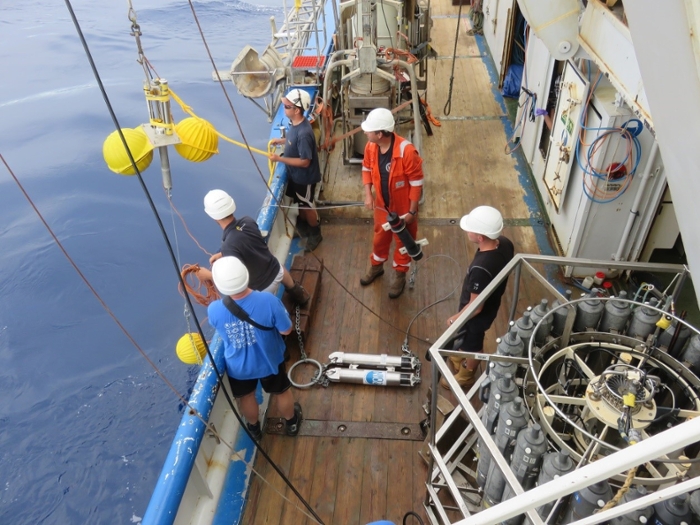 Pelagia crew members deploying a hydrophone and sound logger, with a 500 kg weight, an acoustic release system, floater buoys and a beacon for retrieval after service at the ocean floor. Photo: Hans Slabbekoorn.

The recordings will be investigated to find out to what extent the vent area has a specific acoustic profile and whether the Pelagia and research activities on board will be audible at this depth and change the deep-sea soundscape. Understanding the community dynamics and deep-sea acoustic ecology is urgently needed for environmental impact assessments of container shipping and looming mineral mining activities in these unique places on earth. 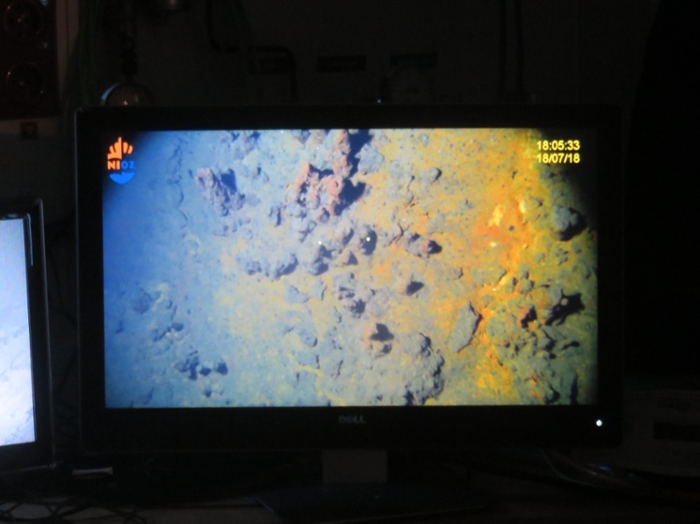 Video footage of the ocean floor at more than 2km depth at the Rainbow vents, 370 km south-west of the Azores, during a parallel session of video and sound recordings. Photo: NIOZ.

Whale prey species assessment
In leg 12b (from Terceira and back to Terceira), Slabbekoorn collaborates with Fleur Visser (on board of her own vessel simultaneously), who received her VENI-grant at the IBL and now works at the University of Amsterdam (UVA/NIOZ) and Annebelle Kok (PhD-student at the IBL). They will study the effects of anthropogenic noise on marine predatory-prey interactions for deep-diving whales and dolphins.

They are using experimental sound exposure and a suite of advanced sensor technologies: on-whale D-tags to record whale movement and foraging; on-whale cameras to record catch rates and prey characteristics; aerial drones to record whale size and group dynamics; and echo sounders to record prey community, density and distribution. The Pelagia will aim at catching prey to get species labels to the echosounder data.

The Institute of Biology Leiden (IBL) is participating through Hans Slabbekoorn in the National Initiative Changing Oceans (NICO), which concerns a collaborative expedition in 12 legs in familiar waters of the North Sea, the tropical waters of the Caribbean, and the deep sea of the Atlantic Ocean around the Azores. About 100 researchers from 20 universities and institutes aim to answer over 40 research questions by collecting data in 186 days at sea. The expedition started the 13th of December 2017 with the Pelagia leaving the harbour of Texel.

This article appeared on the website of Leiden University on July 23th.