During this leg of the NICO-cruise NIOZ brought along a machine that allows us to measure fresh algal samples on board. This type of machine is build that it can handle the rolling seas. The flow cytometer is a piece of equipment that allows us to count the number of unicellular algae (phytoplankton), bacterial cells and even the virus particles in the ocean! Such tiny particles are impossible to see and count with the naked eye and in case of viruses, impossible to see with most microscopes. That’s where the flow cytometer comes in.

What is a flow cytometer?
A flow cytometer can be divided into roughly 3 parts: the fluidics, the optics and the electronics. A flow cytometer measures multiple physical characteristics of a single cell or particle simultaneously during the time it flows in suspension through the flow cell (they are transported by the fluidics). The optics are composed of a laser, which acts as a light source, and an objective lens that focuses the light. In the flow cell the laser and sample interact, altering the characteristics of the beam. These altered characteristics are then detected by a photomultiplier tube. They are then recorded and digitised by the electronics of the machine, transformed into statistical data and presented in various graphic formats and tables.

The interrogated cells display a forward or 90-degree angle scatter of the light, providing information about the size, shape and granularity of the particles measured. The laser can excite a fluorescent tag with which the cells or particles were labelled beforehand (e.g. stains that bind to DNA or that are released upon cell activity). However, phytoplankton also display Chlorophyll pigment autofluorescence when working with an Argon laser. This way, algal cells can be easily discriminated within a heterogeneous seawater sample. Bacteria do not have such characteristics and are counted by staining their genetic material with a fluorescent dye. With the development of highly sensitive dyes, viruses can also be visualised using the flow cytometer. These particles are generally smaller than the wavelength of the laser of the flow cytometer and therefore recognisable based on scatter properties. However, after staining them they are countable, which allows us to take many samples during our cruise! 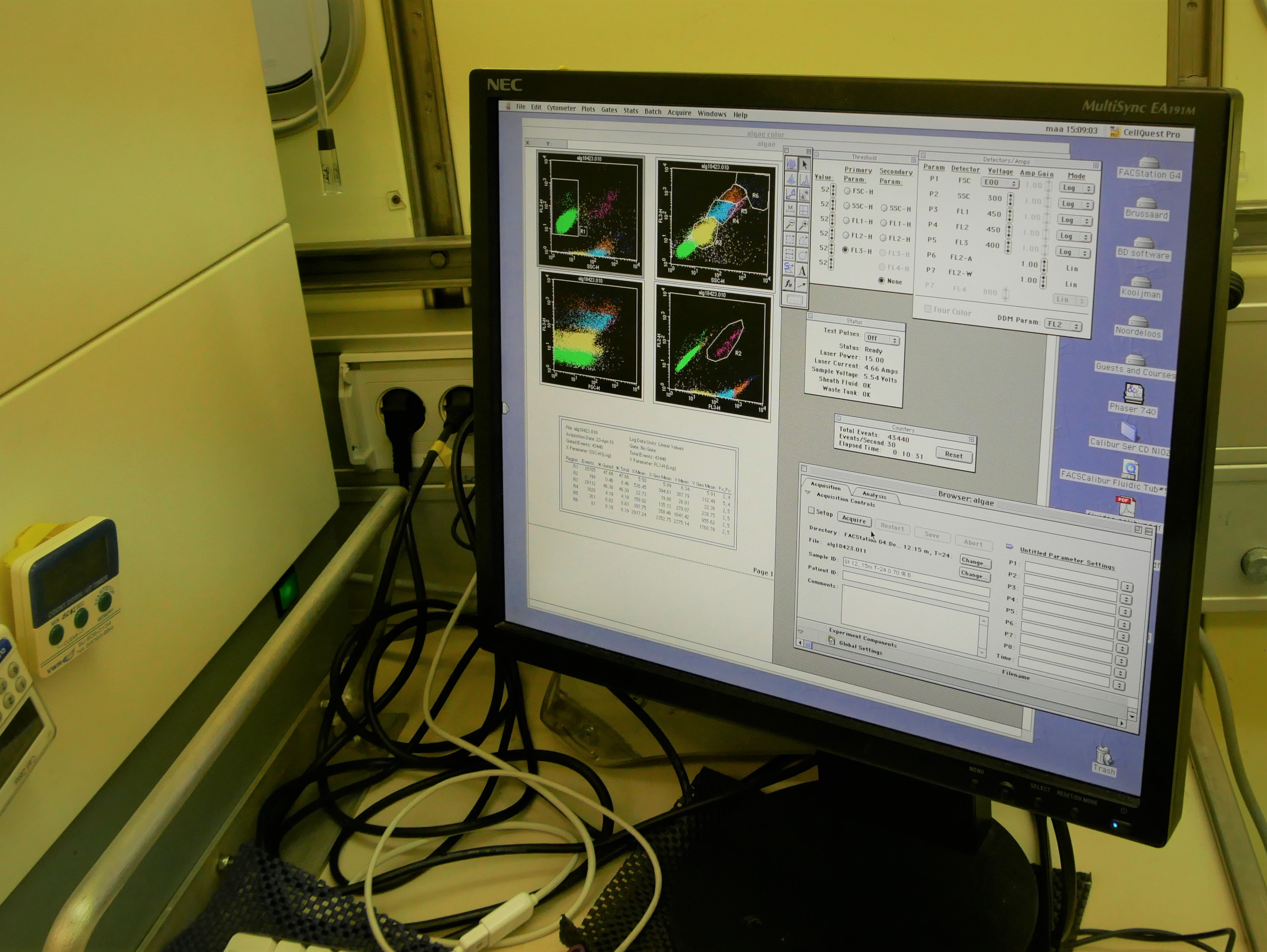 What are we measuring?
During Leg 8, we are using the flow cytometer to measure bacteria, phytoplankton and viruses in order to respond to various research questions. One of these is to ‘How important is phytoplankton mortality due to viral infection (viral lysis) as compared to cell loss resulting from predation?’. The ecological relevance of viruses in the oceans, i.e. species succession, genetic biodiversity, and their role in fluxes of carbon, nitrogen and phosphorus, is increasingly acknowledged. However, estimates of viral lysis of phytoplankton are still limited.

Furthermore, we would like to know ‘To what extent does the rate of viral lysis vary between the different oceanic provinces that we encounter along the temperature gradient from the Bahamas to Ireland?’. Oceanic provinces are characterized by differences in biology, most often due to variation in regional seawater temperature, salinity, nutrients (like nitrogen and phosphorus) and currents. The ocean province specific answers to these questions will help to better understand and predict how global climate change will impact energy and matter transfer through the food chain, nutrient recycling, and carbon exportation to the deep ocean.

By using the flow cytometer, we discriminate between many different phytoplankton populations and enumerate their members. For each specific group we determine their growth and death rates. Back at NIOZ, Corina will also analyse the bacterial and virus samples, as well as the phytoplankton samples obtained by Maria pertaining to the growth and photosynthetic capacity of the algae. Jacqueline’s samples, which relate to the production and release rates of the anti-stress compound DMSP by the algal cells, and Susanne’s mixotrophy and incubation experiment (manipulating nutrient and light conditions) samples will be analysed back on dry land. As such, the stimulating and collaborative nature of this NICO adventure is hoped to act as a pilot for future endeavours. 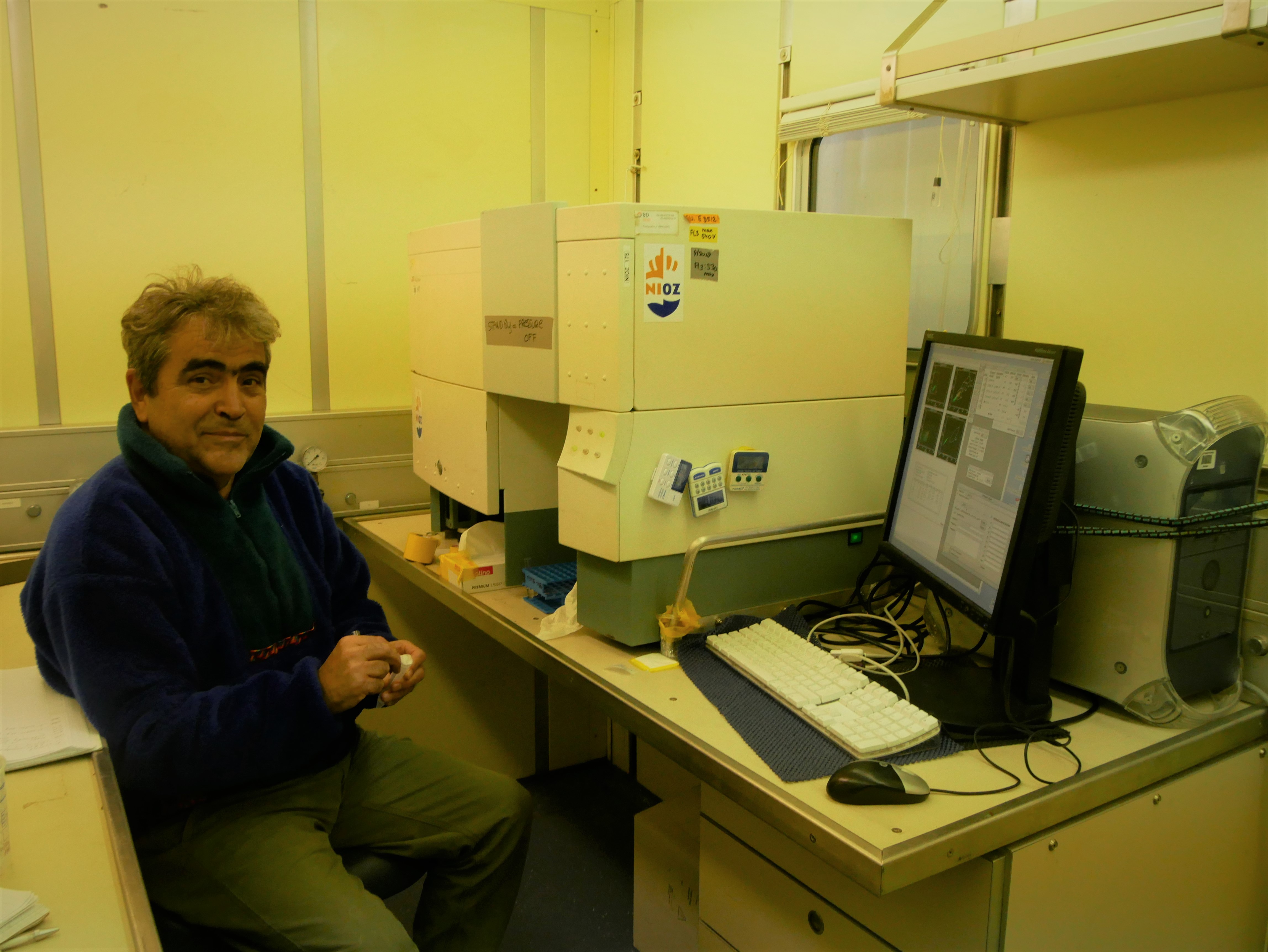