When I first got the news from my supervisor, Katja Peijnenburg, that I was one of the scientists on Leg 8 of the NICO expedition, I was ecstatic! It sounded like an adventure of a lifetime, to be able to traverse the Atlantic Ocean from the Bahamas all the way to Galway in Ireland. 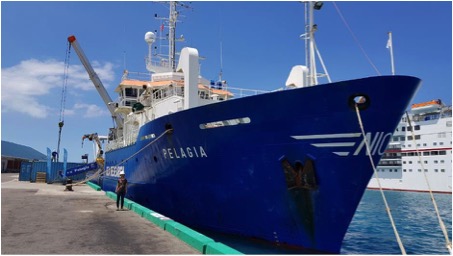 “You’ll be able to spend a month at sea, isn’t that exciting?” My friends and colleagues exclaimed. I racked my brains to think of the longest time I had been on a boat in the past. That was about 3 years ago, when I took a ferry from Italy to Croatia. I could not remember much from the ferry, except that it was a peaceful night of rest before I continued my holiday. This upcoming cruise was going to be a completely different and exciting experience.

Departure from Nassau
Together with Lisette Mekkes a fellow PhD candidate, I boarded the Pelagia, our trusty ocean vessel. After an afternoon of settling-in and briefings, we were ready to set sail at night! I stood on the deck of the ship as we left the twinkling lights of the Bahamas behind, under the watch of the starry night sky. This was the last land we would see until the end of the month. The Pelagia ploughed steadily onwards, past the crowd of screaming seagulls perched at the end of the harbour, past the lighthouse winking at us, towards the seemingly endless ocean.

Mealtimes & sampling timetables
Life on board is a different experience than on land. There is no morning commute, no office to get in from 9 to 5, and no grocery trip to make. Instead, my schedule was governed by mealtimes and the sampling timetable. Hassan, our chef, is a very good cook and never fails to send me to the messroom every time the meal bell rings.

Research on tiny snails: Pteropods 'Sea-butterflies'
I work on pteropods, which are tiny snails that live in the open ocean. They are part of the zooplankton, which show a behaviour called diel vertical migration. They come up to the surface to feed at night, and return to the depths in the day, to avoid being eaten themselves (their predators hunt by sight). This means that we have to collect them really early in the morning, when they are nearer the surface. The first few days were spent adapting to this schedule, and we would get up, bleary-eyed to collect our valuable pteropods.

A great advantage of being at sea is being able to see these beautiful animals alive and in their natural state. This was the very first time I had seen pteropods flit around gracefully in the water. I finally understand why they are commonly called “sea-butterflies” and “sea-angels” since they use their modified foot as wings to fly through the water column. 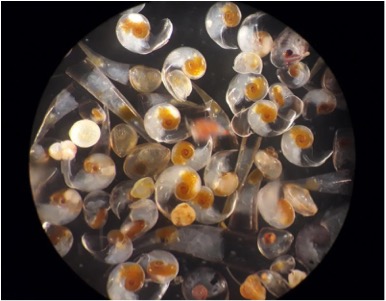 Spinner Dolphins
It is not just the wide, open ocean we see every day. Sometimes other inhabitants of the ocean drop by for a visit. On more than one lucky occasion, I have seen spinner dolphins playfully somersaulting through the waves and racing alongside us at the bow of the ship. We also had rafts of Portuguese man-o-wars drift past us, with their delicate iridescent sails catching the sunlight as they did so. Storm petrels, seagulls and swallows would glide past our ship curiously before angling away to catch the wind again.

I am very excited for the rest of the cruise as we approach the rougher, richer waters of the North Atlantic towards our destination, Galway. The waves are getting larger, with the promise of more pteropods to collect and more wildlife to see!