How do organisms living at the bottom get their food?

The expectations when hauling in a zooplankton net are always high, with thoughts running through the head of what small creatures might hide in the deep. Will it be large, elongated, transparent creatures with triangular heads, or maybe small almost indistinguishable crustaceans? No matter what comes up, the next thought is already in the head while sorting the catch. Would it be different during the night? 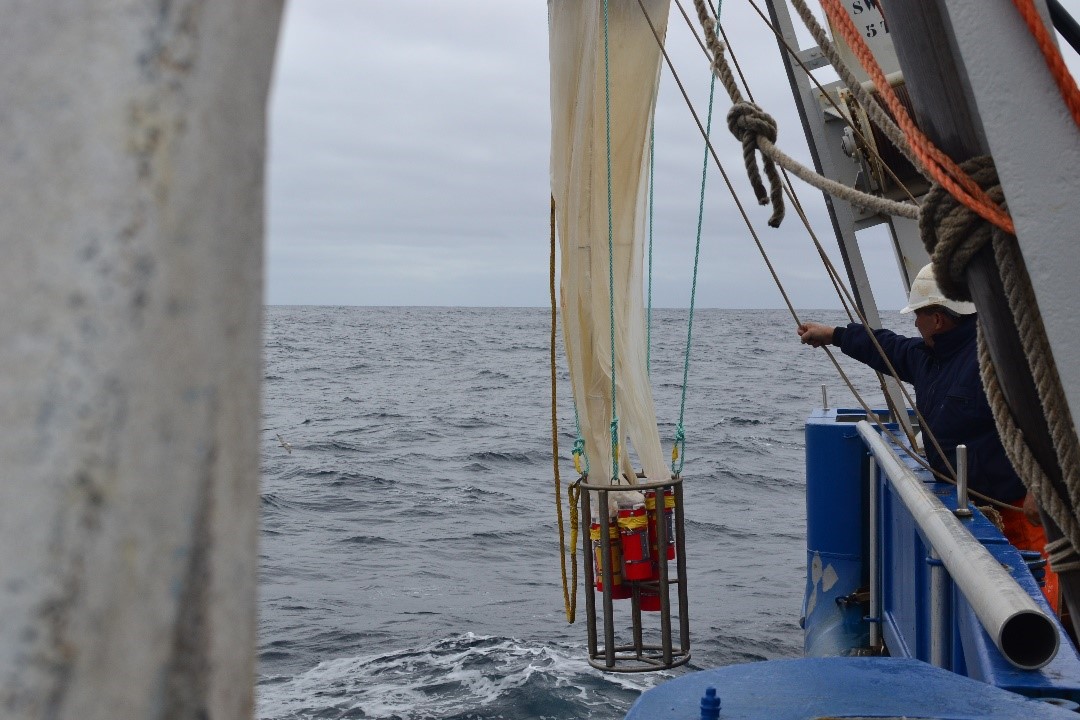 The zooplankton net deployed into the sea. Photo: Edda Heinsman

Fishing for small animals
When sampling for zooplankton, the first thing we need to realise is, we are looking for rather small animals. This means the nets we use to catch the tiny creatures have a mesh size of just 100 µm and even with this mesh size, we cannot catch the smallest ones.

Luckily fish and larger animals swim away from the net while we are sampling, or they might destroy the fine nets. Five of such nets are mounted on a large square box with springs and levers to open and close the nets. At the bottom of the nets, there is a small bucket called a COD-end and in this, the zooplankton is collected.

We started out by checking all the nets for damage, making sure we would not draw a net full of large holes through the water, then the COD-ends were attached, and the nets were mounted on the multinet box. We were ready.

Night & Day
Our plan was for multinet to be carried out at midday and midnight. At midnight, it is too dark for predators to see the zooplankton, which will then accumulate in upper part of the water where there is a lot of algae to feed on. When it is midday however, the zooplankton may have migrated towards the bottom to seek shelter from the predators. These two very different scenarios can then show us how much zooplankton is in the water and how the distribution differs from night to day.

The first net we deployed was from the back of the ship and went down to 730 m. We were careful to get as close to the bottom as possible without dragging the net across the ocean floor. Steadily the multinet came up and one by one, we used the onboard computer to open each net at our desired depth, so we can see where there are more zooplankton, the upper water column or near the bottom. After a long haul-in, the multinet came on deck, where we collected the samples from the COD-ends and fixed them for later analysis. As the waves were still low, we reattached the COD-ends and went for a second deployment.

Waves
Over the back of the ship it went, and into the ocean. All was well, but on the way up from the bottom, the wind picked up and the waves increased. It might seem odd to worry about waves in the middle of the ocean, but the multinet is situated on the back of the ship near the screw so for the wire to get entangled is a real possibility if we are not careful and waves does not make it any safer. By careful manoeuvring of the wire, the crew got the multinet on deck and we could retrieve the samples. Luckily everything went well, the multinet had been sampling correct in the water and the waves had not influenced the flow of water through the net.

Copepods
This second sample is not fixed immediately, hence a little more time can be given to look at the creatures in the net. While sieving and separating each net sample into different sizes, we got a good look at the different species. There were larger crustaceans at around 2-3 mm along with some worm like creatures which eat the smaller zooplankton. In the smaller zooplankton, we saw numerous small black dots looking back at us, slightly moving around in the sample, amongst these, copepods were visible with their long antennas extending from the front of their bodies.

Food & lipids available in the water
All this was sampled and saved for analysis, that eventually will show what kind of food or lipids are available in the water column and what might be available for the deep-sea filtering organisms. While these samples will describe the different kind of lipids, the first samples we fixed will be analysed for which species it contains and at what depth they were found.

As we are not able to catch the smallest zooplankton species with the multinet, we sampled bottles of water from different depths, which will be analysed with a microscope. These microscopic species of zooplankton are, though unseen, extremely important as they can eat more algae, than the larger zooplankton species put together.

Describing the water column from the zooplankton point of view along with the water transport can help describe how much food gets transported to the organisms living at the bottom.

With a first sampling being successfully finished, the weather unluckily turned worse and night sampling at this point has not been possible, but as soon as the weather allowed it we were back and dragging the large net through the water. 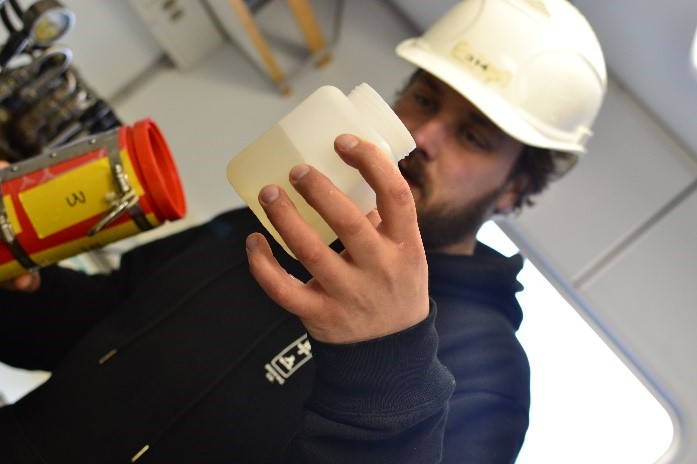