One of the most important instruments on our hunt for eddies (and generally in oceanography) is the CTD. CTD stands for conductivity, temperature and depth.

On the Pelagia, this instrument is mounted in the center of a steel frame of approximately 2 meter height and width, with on the outside 24 water sampling tubes, called Niskin bottles. Each Niskin bottle can contain 12 liters of water, has an opening at the top and at the bottom, and lids on each end which are connected with a spring in the middle of the tube. A system of ropes and hooks keeps the spring under tension and the Niskin bottle opened until a signal from the connected computer on board releases a hook, and the lids snap and close the bottle. This steel frame is lowered with a winch from the ship into the water.

Heavy equipment in heavy weather
Before a measurements starts, the CTD operator (one of us scientists) carefully checks if all the Niskin bottles are ready and helps the crew members to guide the steel frame on the winch into the water. This can be quite demanding: the frame is heavy, the ship is moving and the wind can push the frame so that it starts swinging. Safety shoes and hard hats are mandatory!

One hour to reach a depth of 2km
Once the CTD is in the water, a computer software is started where the measured data is shown. If all the sensors work, the operator tells the deck crew to lower the frame. It takes almost an hour to reach a depth of 2 kilometers. During this time, the scientist can recover from the stressful deployment of the CTD and watch the exciting data the sensors deliver on their way down.

Sample analyzation
Before the bottom is reached, he or she tells the crew member on the winch to slow down and stop. Then we have to get the CTD back up. On its way up, the Niskin bottles are released at certain depths to collect water samples. The samples are analyzed for their nutrient content, which cannot be measured by sensors during the cast. Now the CTD is brought back on deck, which is again an adventure: with all the bottles filled, the frame now weighs a ton! 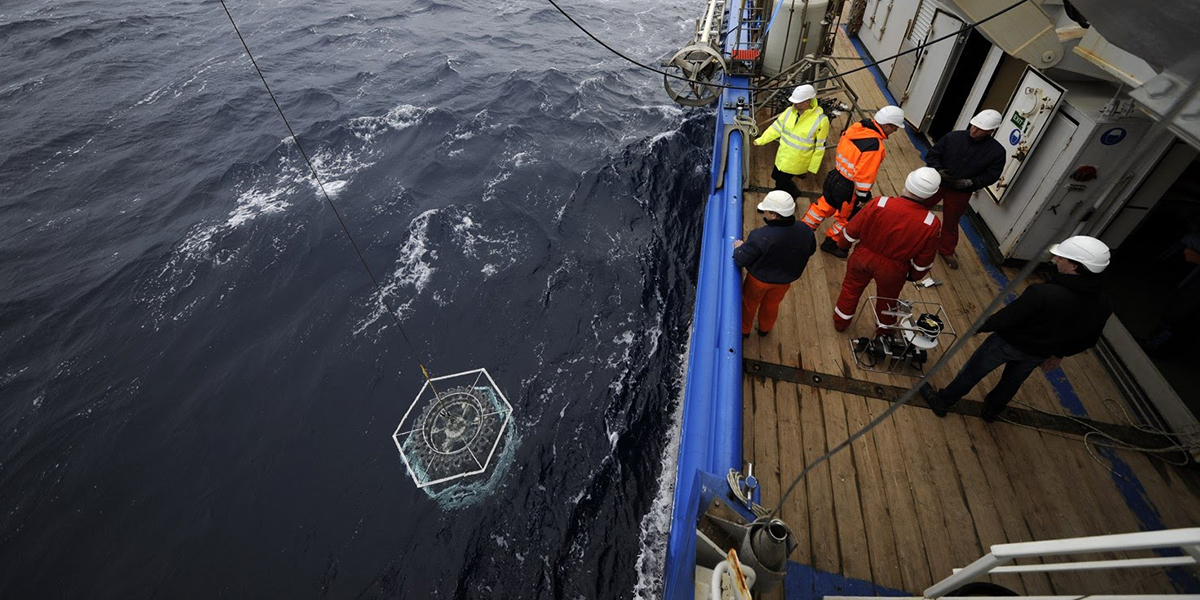 The CTD steel frame is lowered with a winch from the ship.  When the bottles are filled with water, the CTD can weighs a ton!  Photo: Thijs Heslenfeld

Oxygen & Cholophyll
In addition to the profiles of salinity (calculated from the electrical conductivity of water) and temperature, the CTD also has sensors to estimate the oxygen and chlorophyll content of the water. A typical profile in the Caribbean Sea starts with the surface mixed layer: Up to a depth of 50-80m, wind and waves stir the water so much that temperature and salinity are nearly constant. This layer is bounded by the 'thermocline', a thin layer of water where the temperature is suddenly decreasing. You can feel this phenomenom when you go swimming in a lake in summer: It feels warm when you swim close to the surface, but you can feel cold water when you put your feet deep down. The same happens in the Caribbean Sea – only that the warm layer is much deeper.

Deep chorophyll maximum
Below the thermocline, the 'deep chlorophyll maximum' starts. Chlorophyll is what gives tree leaves their green color. In the ocean, it is contained in algae that need sunlight and nutrients to grow. Algae growth starts in the surface mixed layer, but soon after the growth started, all nutrients in the surface layer are used up. After that, the only zone for algae growth is under the surface mixed layer (where there are still nutrients available) up the depth to which the sunlight can reach: and so a deep chlorophyl maximum develops. In the same region, below the mixed layer, we can also see that the water gets suddently
saltier.

Salinity
Over the next couple of hundred meter, the salinity decreases again, and same applies for the temperature. Below a depth of 1000m, temperature and salinity stay nearly the same up the the sea floor. We can feel the temperature difference when we take the water samples from the Niskin bottles. The water from the samples taken near the surface is around 27 degrees Celcius. The water from the deep samples is around 4 degrees Celcius and feels nice and cool in the warm Caribbean weather.

The CTD coming back to the surface.  Photo: Thijs Heslenfeld.

CTD traditions
Some traditions related to the CTD have developed in the scientific community: A can of Coke can be attached to the frame, and lowered to a depth of a couple of kilometers. When it comes back, deformed by the pressure and cooled down to a few degree, you can enjoy your deep sea drink. Sometimes, half-way through a long cruise, one of the Niskin bottles is filled with refreshing drinks before lowering the frame – but watch out: If you lower the CTD too deep, the liquid in the bottle is compressed by the pressure and sea water flows into the bottle. Your drink will be a bit more salty than usual. On this cruise, at our deepest station, each of us decorated a styrofoam cup with waterproof markers. These were put into a ‚'CTDcup holding device' (old nylons) and tied to the CTD frame. At a depth of 5 kilometers, the immense pressure pushed the air out of the styrofoam, and the cups shrunk to the size  of a shot glass. Now we each have a selfmade souvenir of the cruise. 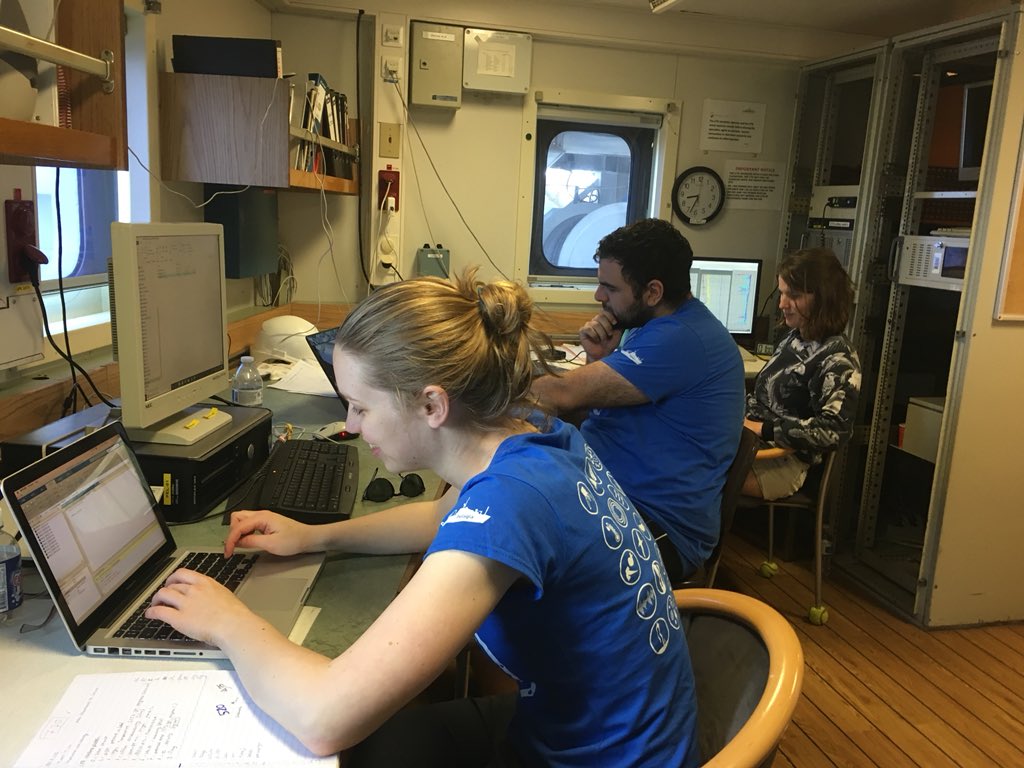 In the CTD room on the RV Pelagia we analyze  live data from each depth. 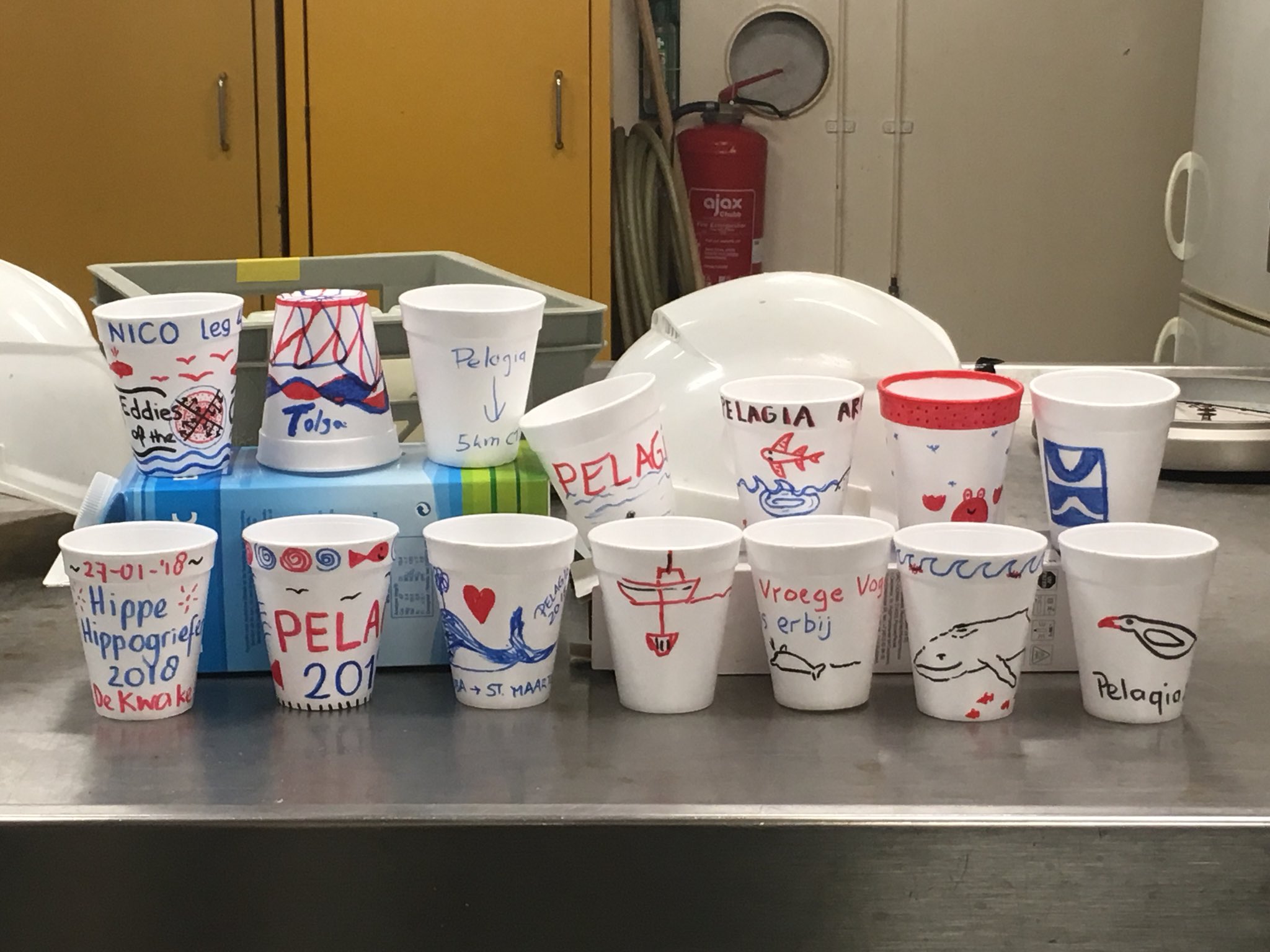 As a tradition we send these coffee cups from foam to the ocean floor with the CTD. After they had been on a depth of 4800 meters, they look a little bit different and smaller. See photo below. 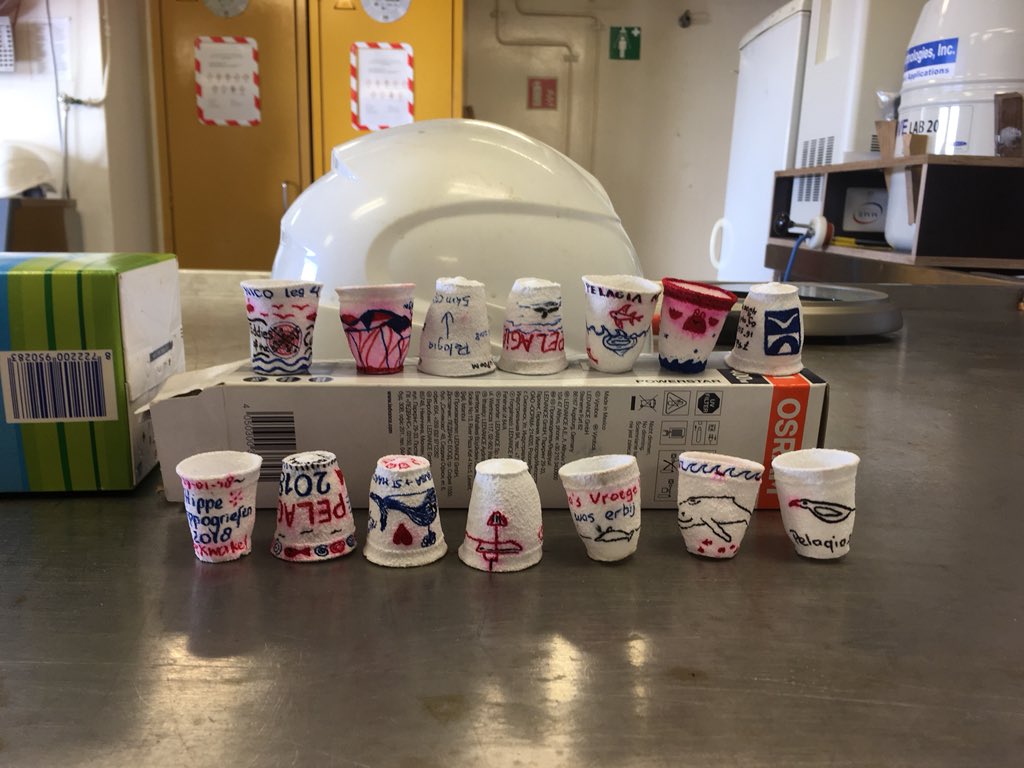